From OCAD Wiki - English
Jump to navigation Jump to search

There is an old forest orienteering map, which shall be updated. The old map is not georeferenced (Check it under Menu Map > Set Scale an Coordinate System ) and has an outdated symbol set. According to our Symbol Set Overview page, this is ISOM 2000, supplemented with some own symbols. 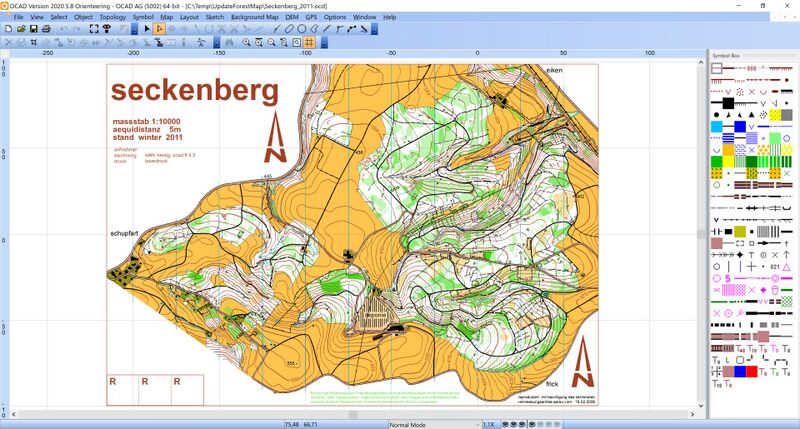 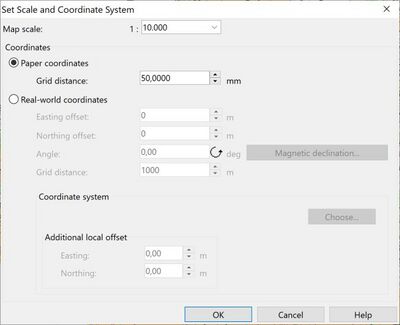 In a first step, we update the old symbol set to ISOM 2017. This is currently the latest symbol set for forest maps defined by the mapping comission of the International Orienteering Federation.

Maybe you have added additional symbols to you old map which are not included in the standart CRT file (white lines). If you like to take these symbols to the new map, just click them and the corresponding lines appear in blue color. This means that OCAD copy these symbols with the used colors to the new symbol set.

In our example, there are several symbols for Erdböschung (Earth Bank) in the old map, which we like to take over to the new map.

A white line means that OCAD deletes this symbol, but not the objects. So the objects will be Objects with unknown symbol.

You can click on the symbol icon to choose another symbol. It is only possible to choose a symbol from the same symbol type (e.g. line symbol to line symbol).

Now check the list carefully and make adjustments where needed. Once you are done, click OK to convert the map. OCAD replaces the symbols and colors. 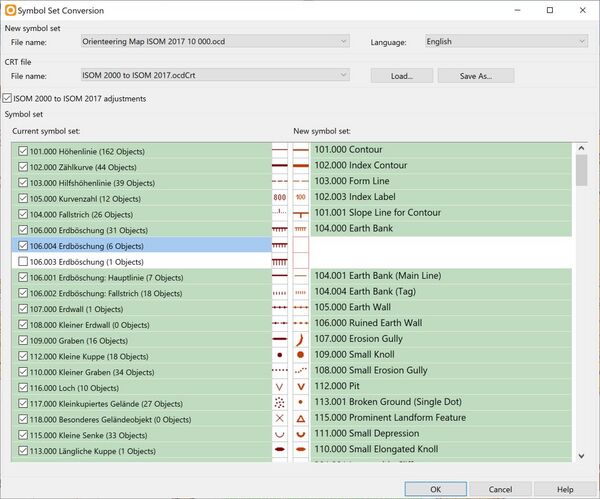 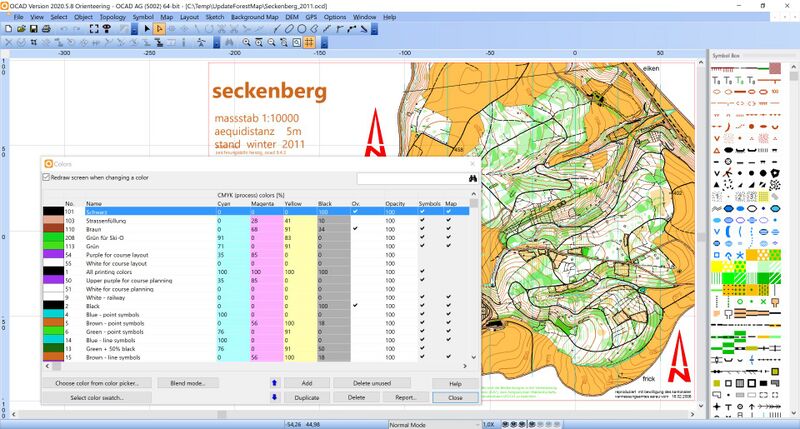 In our example, we have copied several text symbols. Right-click on a symbol in the Symbol Box and choose Select Objects By Symbol. 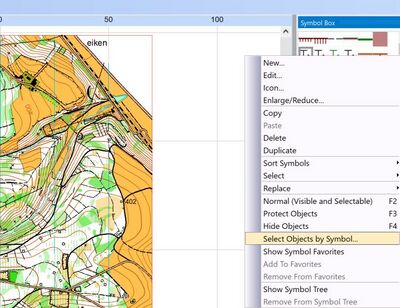 Now you can click on Find to loop through the selected objects. This gives you the possibility to see what is the symbol used for and if it is possible to change its object to an existing symbol. In our case, we change the selected objects to an already existing text symbol and delete the copied symbol afterwards. 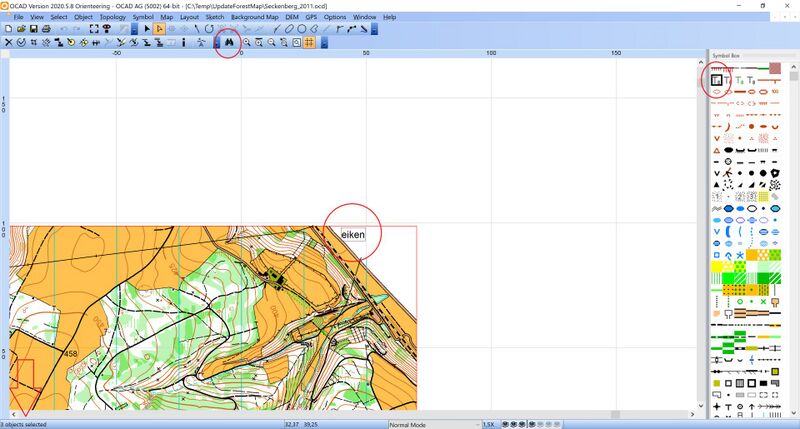 We like to keep one of our coiped Earth Bank symbol. However, due to the fact that the used color for the copied symbol is at the top of the color table, we need to adjust its color. Edit the symbol. First you can have a look at the already existing symbol Earth Bank, to see which colors are used there. 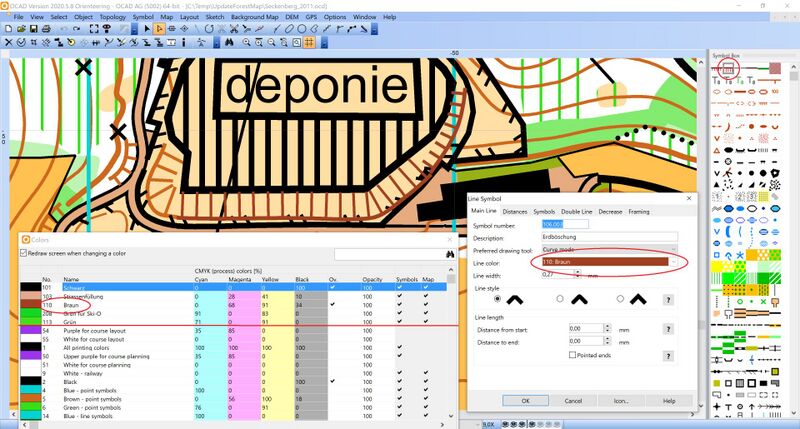 After we have done so in our example, we see in the Color Table, that color 110 Braun is not any longer used in any symbol or on the map. We can delete now color 110 Braun. 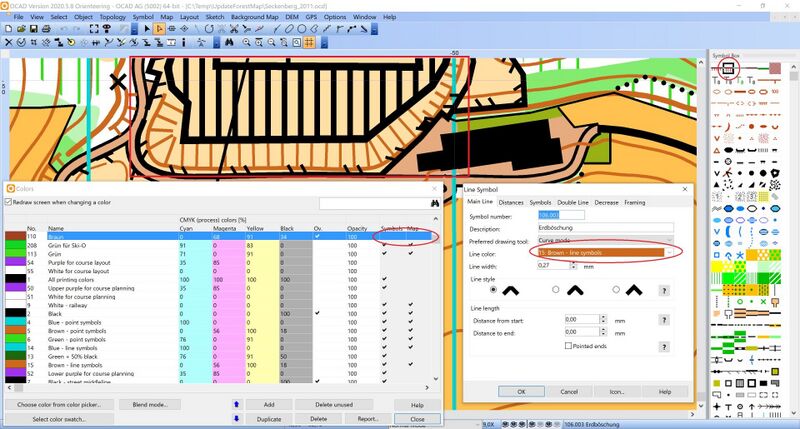 Be aware that after updating the symbol set, you may need to make a lot of manual adjustments. Check the new map carefully. Your old map had a different color table and therefore, object may now suddendly appear over or under neigbouring objects.

As you see in the image below, we changed hedges to the new correspondig symbol in ISOM 2017. Now the objects lie under the olive area. 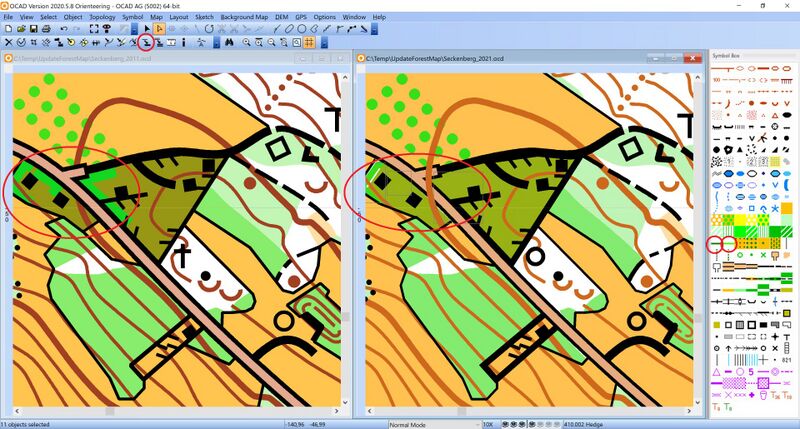 When you are done, choose the function Optimize/Repair in Map menu to verify the map. In our example, we still have 10 objects with a unknown symbol.

We can select these objects under Menu Select > Select By Symbol. We can assign these objects to symbols manually or delete them. 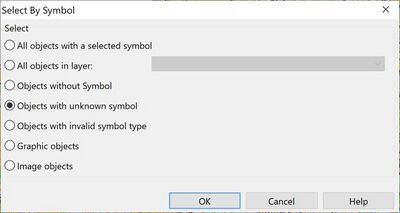 Now we are done with updating the symbol set. It is definitely worth to invest some time to keep your maps up-to-date. 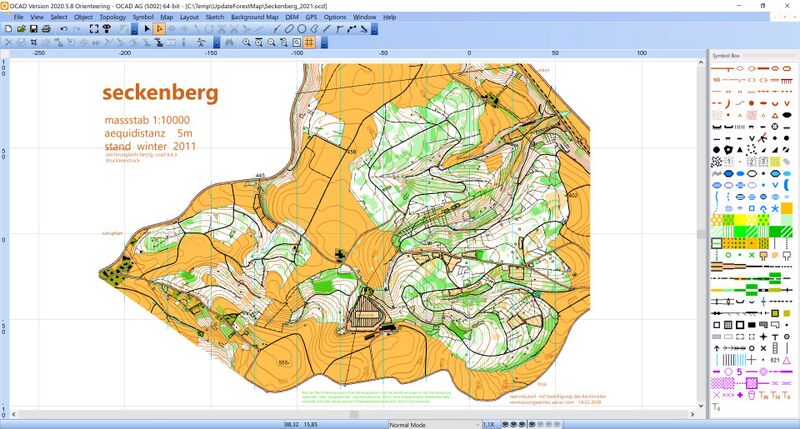 In the second part of our updating process, we like to georeference the map.

For that, we first create a georeferenced map with OSM (Open Street Map) data using the New Map Wizard. Then we will load that map as background map in our forest map.

We start the New Map Wizard and choose the settings as below. OSM are free and available all over the globe. However, in some places they are more accurate and in other places less accurate. But it's way enough for our puropse. 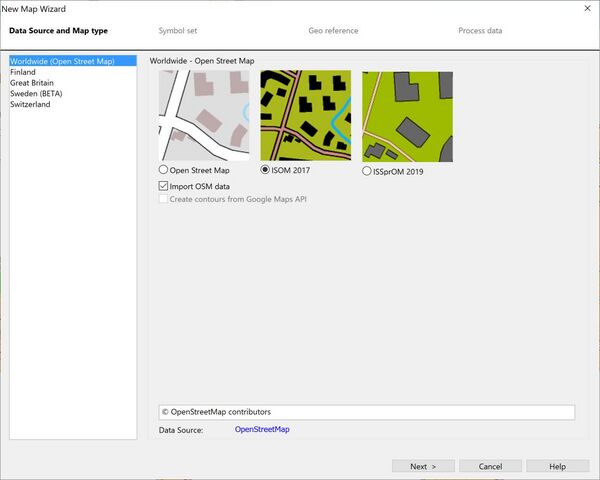 We move to the map location (you can also use the search field). The map will later be croped to the chosen extent in the map window.

Click the Change button to change to the appropriate coordinate system.

We also like to consider the declination (differnece between magnetic north and geographic north), which is filled in automatically, and therefore we activate Rotate map to magnetic north. 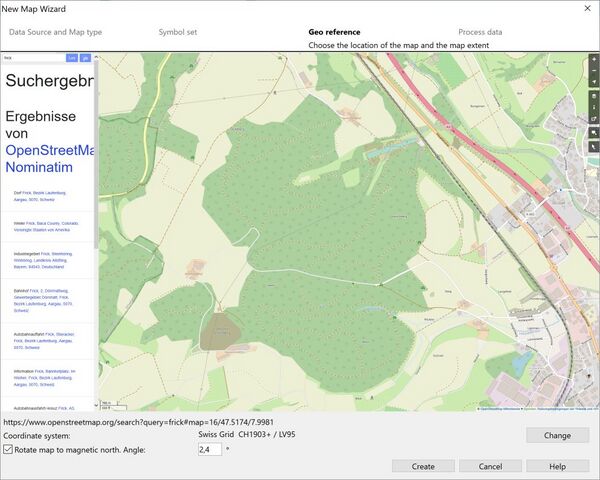 All data have been downloaded and proceeded. As you see in the image below, a coordinate system is set and the map is correctly georeferenced. 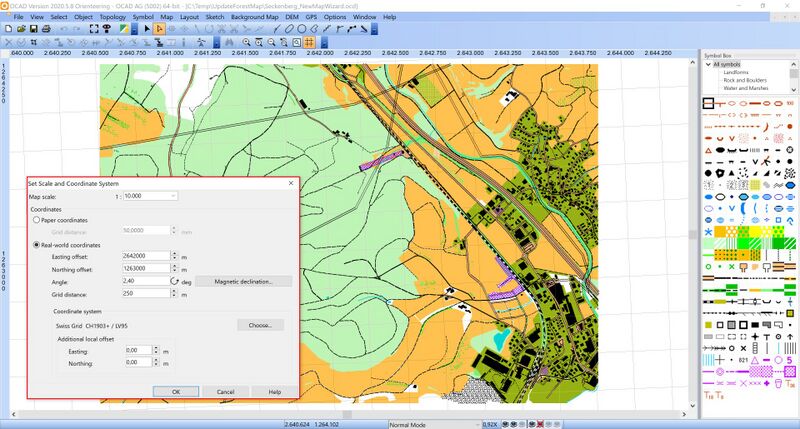 Next we go back to our forest map and rotate that map also by 2.4°. This makes it easier later on to adjust the map. But this step can also be omitted. 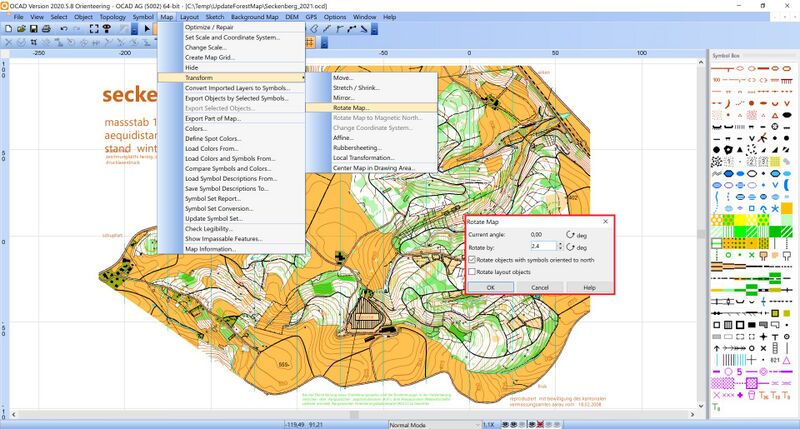 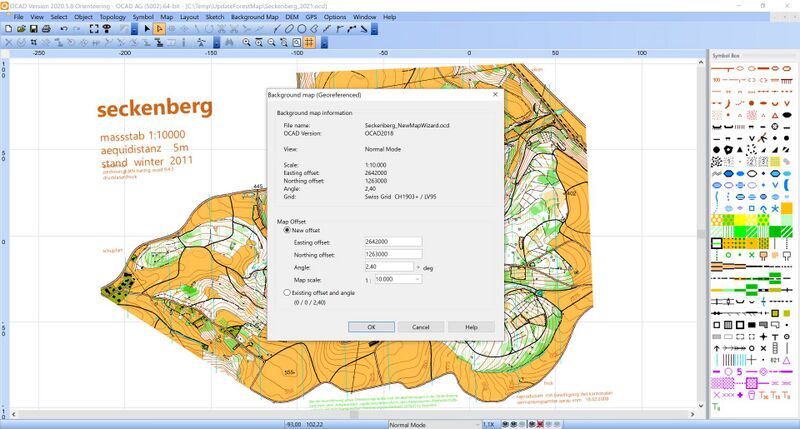 The NewMapWizard Map is now displayed as background map, which is correctly georeferenced.

Switch to Draft Mode to see both maps. 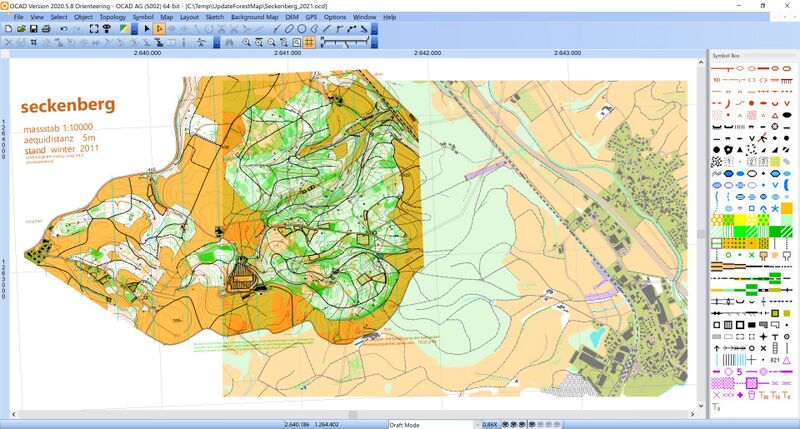 To adjust the forest map to the background map, we use an Affine Transformation (Menu Map > Transform > Affine).

Mark first a point on the forest map and then on the background map.

In our example, one point is enough for a precice adjustment (as we rotated the forest map before). You may also need multiple adjustment points. 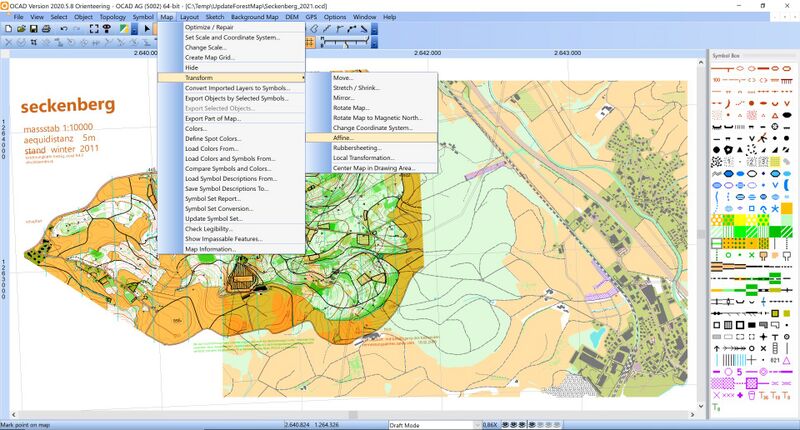 If you are still unsure, if the map is correctly georeferenced, see here. 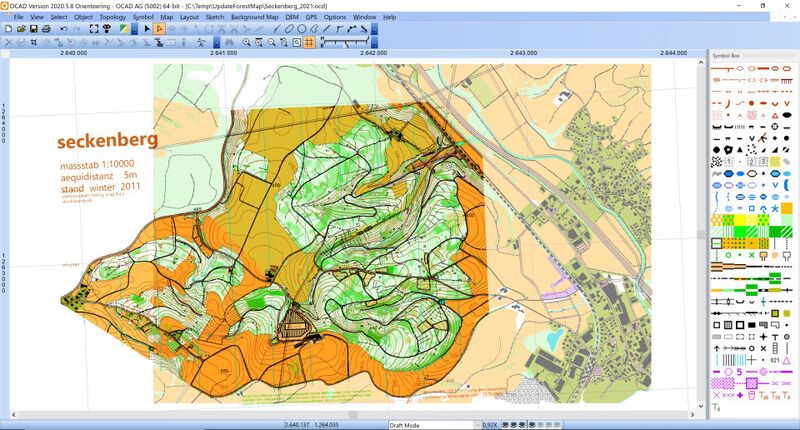 Copy and paste objects between old and new map

In the NewMapWizard Map there are two objects representing dangerous areas, which we like to have in our forest map. This can be done easily. 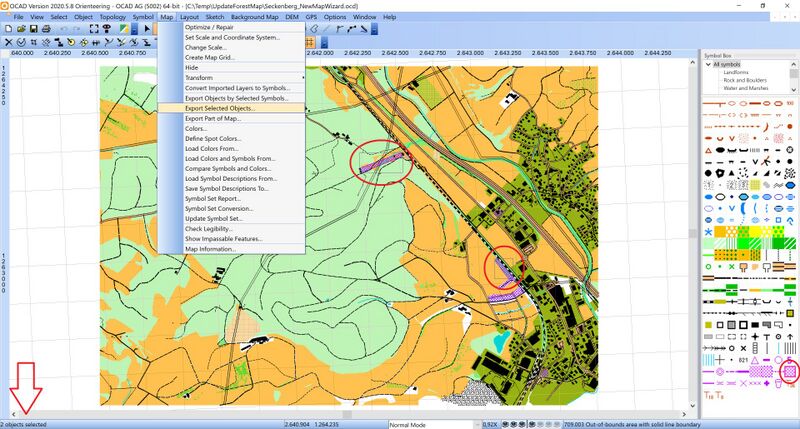 In our forest map, we import these objects under File > Import. 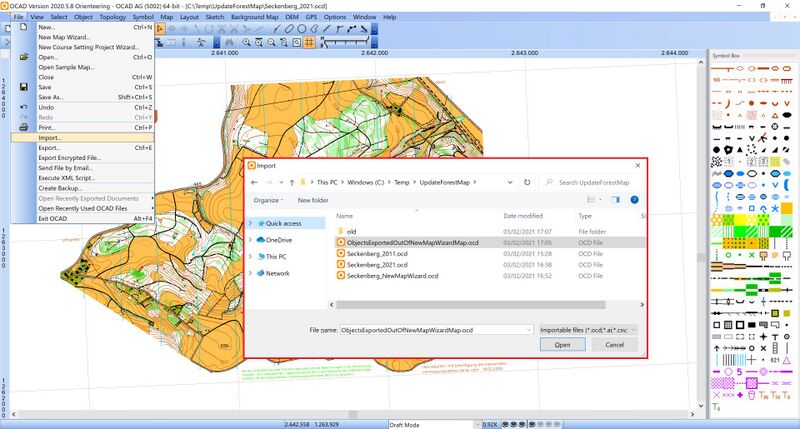 As the maps are both georeferenced, the objects appear automatically at the right place. 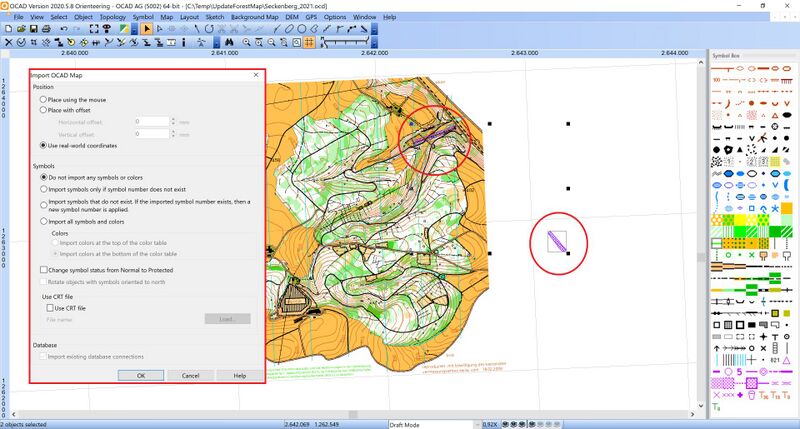 Instead of exporting and importing objects, you can also simply copy and paste objects between to georeferenced maps in WKT format. All you need to do is to define a Shortcut.

Due to the map rotation and the affine transformation, some objects have been rotated, that should point to North again. 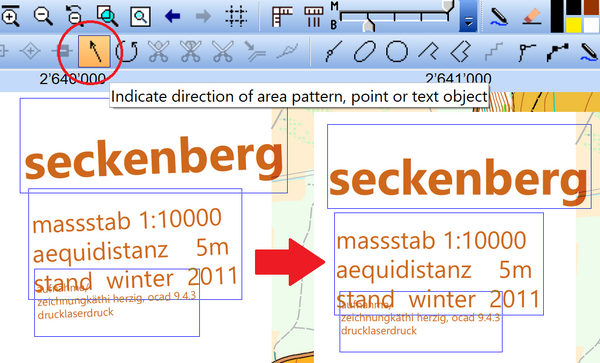