A CRT-File (with the ending .crt) is a text file with the necessary information for the translation. All CRT-Files which are saved by OCAD contain a table with two columns. Information from the second column gets translated into the information of first column. In some cases it is the other way round.

The following table from the Convert Imported Layers to Symbols function can be taken as an example. In the first column symbol numbers of the OCAD File are listed. In the second column the layer names are listed. OCAD converts now each layer to an object with the symbol listed in the first column.

CRT-Files are used for many OCAD functions:

In some of the functions, the CRT-File can be created, edited, loaded or saved directly in the function dialog. This part of the dialog looks as follows: 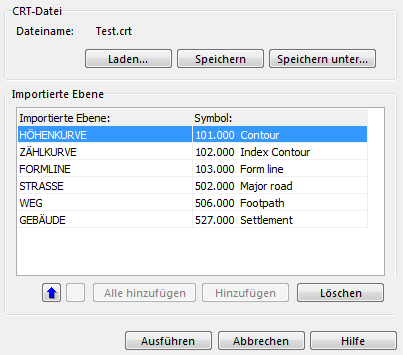 You have the following options:

You can edit a CRT-File with a text editor (e.g. Microsoft Notepad), too.

Load Colors and Symbols From

The CRT-File of the Load Colors and Symbols From function is defined as follows:

If a row of the CRT-File looks as in the example, the symobls of all objects with the symbol number 526.00 will get the symbol of the other OCAD-File with the number 813.001.

The CRT-File of the Import OCAD Map function is defined as follows:

Each line in this file contains an OCAD symbol number and the name of the corresponding DXF layer. The two are separated by a space character. Use an application such as Microsoft Notepad to create a cross reference table.

This is an example:

When you import a PDF-File in an OCAD map, you are asked if you want to save a CRT-File. This CRT-File is helpful when you want to convert the layers in the PDF-File to symbols later on. The layer names are saved in the second column of the file. In the first column you will have to enter the corresponding symbol number manually.

The corresponding CRT-File to the Import Open Street Map Files function in the OCAD directory looks as follows:

At the end of the importing process you have to save another CRT-File. This is the same CRT-File as the loaded one but, in addition, the layer names of objects, which the standard symbol set does not provide, are added with a symbol number 0.0. You can add these symbols to the symbol set and enter the number directly in the CRT-File with a normal Text Editor (e.g. Microsoft Notepad). Then use the Convert Imported Layers to Symbols function to symbolize the Unsymbolized Objects.